“And the winner is…”

“I’m okay, how are you?” Frances replies.

“I’m a little tired today. I didn’t really sleep very well. I woke up early still buzzing after last night. Re-living it. You got back all right?”

“Yeah. When we got home Mia was khackered so we put her straight to bed. We stayed up pretty late though…”.

“Have you seen the blog? I’ve put up the thing that says, ‘Blog North Winner’.”

“There’ve been lots of congratulations and people have been tweeting really nice things. I’m compiling them all for you… I’ll print them out so you can keep it for Mia.”

“She was the star, everyone thought she was wonderful!”

“I know. She wants to speak to you. One minute.”

I hear Mia noises down the phone and try to respond appropriately.

“Hiya Mia, how are you doing? Are you going to have a splashy bath? Are you?”

“Hey, less of the Grandad!! Anyway, well done and everything. Next time I come round I won’t have to bring my camera. I can just come and have a cup of tea.”

Comments Off on “And the winner is…”

“No one round here sells it”

We’re not even through the front door and Ruth has thrust a copy into Frances’ hands. “Page 48, page 48!” she says as the inserts start to slip out of the magazine. 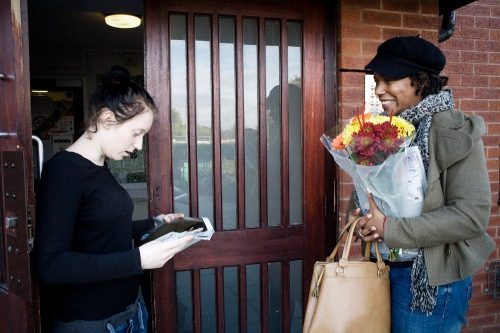 Ruth is the director of mentoring charity, Reclaim, and has known Frances since she was 12. She’s practically a surrogate parent and, as such, is possibly more excited this morning than either Frances or me.

After Frances has leafed through the article, and exclaimed ‘Wicked!’ more times than there are pages, we are eventually allowed in.

“I’ve already been out to try and get one,” says Frances, “but no one round here sells it. They said, ‘Why, do you read the Guardian?’ And I’m like, no, I’m in the Guardian!”

“There’s a picture of you half naked,” Frances says to Hassan as she sits next to him to show him the piece. “Look Mia, there’s you.” 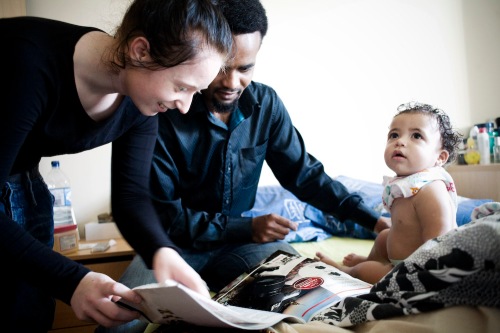 They are in a rush this morning. Ruth is doing a zip wire challenge for Reclaim and she has managed to get Frances a place too.

“Have we got time for a brew?” asks Frances.

“A quick one,” replies Ruth.

There are new pictures on the wall: some of the photos I gave to Frances on my last visit; a group one of Hassan’s family and a couple that Frances has had since childhood.

“That’s the one I robbed from school, and that one with the writing on was when I was about seven.”

I’ve brought Frances five copies of the paper, so she can give them to her family and friends. “I’ve been to four different newsagents this morning and bought five copies from each,” I admit. “I didn’t want to clear out a single newsagent in case someone I knew came in to buy the paper!”

“The back seat of his car is just full of Guardians,” laughs Ruth. She’s right. It is.

Comments Off on “No one round here sells it”

Such a good girl

I’ve not been upto much just college, I’m not alloud to change my course because of my attendance + a waiting list so I have to stay on this one but I will be guarenteed a place on the beauty course next year. I’ve not been to see my mum since she has come out of hospital because I’ve not been feeling to go out I reli I no she is ok tho. Still not heard anything about moving and my mum keeps avoiding the subject when I talk to her about moving in with me she does that avoids talking about things it does my head in. O I applied for a budgiting loan so I can buy some new things but the job center haven’t received my acceptance letter twice and I can only send it by post but now because of that there saying I can get it faxed to me sign it then fax it back I’m not alloud to just hand it in face to face they won’t accept it for some reason. Mia is good she is getting bigger and cleaver everyday she’s such a good girl. I have to apply for my mums birth certificate she has one but her mum won’t let her have it. I need it to get my passport my birth certificate isn’t good enough apparently it doesn’t prove I’m a british citizen even tho it says on it that I was born in old trafford witch blattently means I’m britsh there bloody ridiculous…

Comments Off on Such a good girl