By the time Hassan’s family convoy arrives at 7.20 some of the other guests have already left and one or two of the resident mums have returned to their flats to put their children to bed.

Plastic bags full of ingredients, saucepans and a deep fat fryer are unloaded from the back of the Zade. Two sisters and a cousin head up to the flat to prepare food while Hassan nips to the shop to buy cooking oil which has been overlooked. When he finally makes it into the communal lounge – where the party has been swelled with aunties, cousins, uncles and nephews – he is berated by Frances and her sisters. “Yes, there might be African time but everyone on British time has already been here since four and are ready to go home!”

Hassan takes it in good humour and, to her credit, Frances moves on. At this point in a stressful evening other couples might have gone off on one but Frances holds it together and the two of them are soon laughing and joking about who’s going to open the birthday card with an anticipated money gift.

But even now the cake-cutting – and more importantly, the cake-eating – is delayed until the extra food is ready. In the meantime Frances introduces me to Hassan’s mother, the matriarch around which this close Somalian family clearly revolves. “He’s the man who takes all those pictures,” explains Frances.

Eventually the moment has arrived and Hassan and I carefully drag the wobbly cake table into the middle of the room. Mia is brought forward and I get the photograph which marks the end of her first year. Their daughter is one year old and from where I’m standing I see a toddler flanked by a devoted mum and dad, surrounded by a loving extended family, and poised to enjoy a childhood in complete contrast to her mother’s. 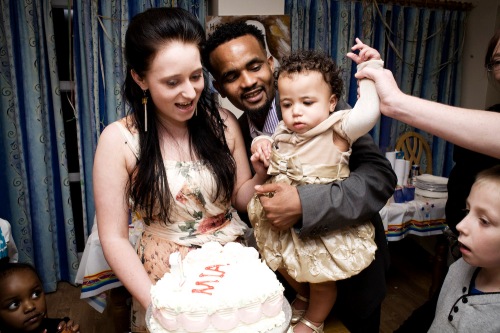 Jacky is tired now and getting restless. She wants to go home. After a few pictures of Hassan’s family, I pack my things. With Jacky installed with her oxygen in the front, Frances’s sister and her kids in the back and the wheelchair folded in the boot, we set off back to Moss Side leaving the second party to get into full swing.

Comments Off on The second party