I turn up at Frances’ place wearing a ‘tux’. Earlier in the afternoon someone had said I looked like James Bond. Or did they just say James Bond wears one of those?

“You’ll be pleased to see the place is a mess,” says Frances, as she leads me from the reception up to her flat. I’m always joking with her that her flat is too tidy, not photogenic enough. 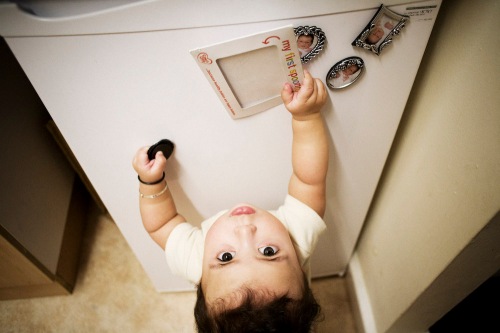 “How did it go?” she asks. I’ve been a few streets away, photographing the Reclaim graduation ceremony for the Wythenshawe Girls’ project. Two dozen 12- and 13-year-old young woman, uncomfortable in hired gowns and mortar boards, have celebrated with family and dignitaries.

As the young women were arriving in three stretch limos I thought it might be fun if the photographer looked a bit like one of the paparazzi on the red carpet. A bit.

Frances was invited. Her own graduation ceremony would have been over five years ago and some of her cohort were there today, giving out awards to the latest Reclaim graduates. Sadly she had had a bad night with Mia teething and had only got up half an hour before the event started.

“I’ve got something for you,” I say to Frances as I make some room to sit down on one of the sofas. She knows what’s coming and she claps her hands together. “It’s like Christmas,” she exclaims.

Ruth, Reclaim’s director and I have colluded to get Frances online. Everyone who reads the blog likes the contributions that Frances makes but these have been limited to when she has the patience to type an entry into Facebook on her mobile phone. So Ruth has donated a redundant laptop and between us we have paid for a internet dongle.

“I’ve already put the web address in the favourites.”

“Oh, yeah,” she says scrolling down the latest entry about her and her small family shopping in Wythenshawe. Although she had read the text on Facebook, this is the first time she had seen the pictures.

“And it’s so small… I’ll be able to take it to college and look really important doing emails on the bus!”

Now she is crawling and pulling herself up, Mia doesn’t let her mum spend more than a couple of minutes with the new ‘toy’, demanding her attention by clinging on to the end of the sofa.

“I can’t stay long,” I say, getting up. “See if you can write one post a week… that would be brilliant.” 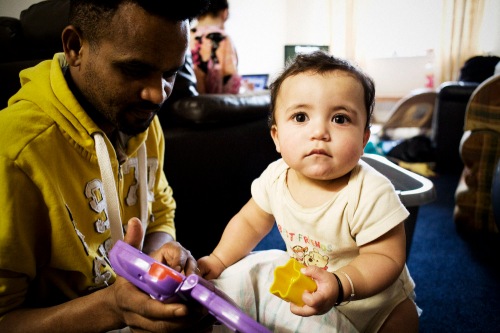 Comments Off on Man in tux