It’s late afternoon as I drive through the Wythenshawe estate. Most of the local schoolchildren have gone home. There are just a few stragglers at the bus stops now, late because of football training, a volleyball match or detention.

Frances and I are off to a ‘do’ at the town hall to celebrate Reclaim winning a Philip Lawrence Award. She’s pretty much ready, her hair and beauty training put into practice. 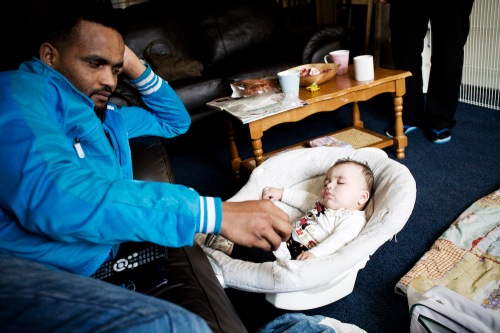 In the flat, Hassan is lying on one of the sofas with Mia asleep in her chair at his side. I haven’t seen him for a few weeks so it’s good to catch up.

“How’s the job search going?” I ask, after we’ve chatted about Mia’s new obsession with mobile phones. “What’s on offer? Anything?”

Hassan says he has been to a jobs fair at Manchester City’s football stadium. I’ve been there too. I used to work for the regeneration company that organised them. A large conference room, more likely to host a footballer’s testimonial, has hundreds of jobseekers surfing the 20-30 stands manned by patient recruitment professionals. It’s well run. There are support staff from employment agencies helping fill out application forms or compose CVs.

“There were only two things I was interested in,” says Hassan. “One was for the police, working in the community or something.”

“There would be six months training with that,” says Hassan. “And the other was fork lift truck training. Every job now in a warehouse always asks for a forklift truck licence.”

So next week, Hassan is on a free four-day forklift truck training course. He’ll enjoy it. He’s into cars and driving, and I can imagine him reversing at speed between the pallets, alarm blaring, yellow light flashing. But again, there will be childcare issues if Frances is to get herself to college.

“If you’re stuck I could put out an appeal on the blog, I bet you’d get lost of offers… from strangers.”

“Mia, will go to my mum,” Hassan says, perhaps not realising I am joking.

With the two of them here together and with Mia’s six-month ‘birthday’ coming up at the weekend, I ask how things are.

“And how are you two getting on? Living together?”

“Arguing,” says Hassan, smiling. “No, we’re not arguing anymore. There isn’t time now that you’re at college. Before we’d spend all the time together.”

“And what do you normally argue about?” I ask, mischievously.

I remember Frances talking about cleaning when I first interviewed her, when she was still living with her mum. She admitted she was a bit obsessive and liked to keep the place tidy. Hassan’s threshold of cleanliness is not, it seems, as high as Frances’ which is the cause for occasional friction.

“It’s International Women’s Day today,” I say to Hassan, still gently stirring it, “and you have to give the women a break and do the cleaning yourself. And soon it’ll be Mother’s Day.”

Mia starts to wake up, a smile on her face.

Comments Off on Going out