“It’s hot in here,” I say, following Frances into the flat. “Have you had the boiler fixed?”
“Yes,” she says, “but now it’s too hot… we have to keep the windows open.”

Hassan is out at the doctor’s. Mia is in her chair watching Cbeebies. Actually Mia is sitting up, rocking from side to side to the music on Baby Jake. “I thought at first she was just swaying,” says Frances, “but she is actually bopping along to it.” And she is. 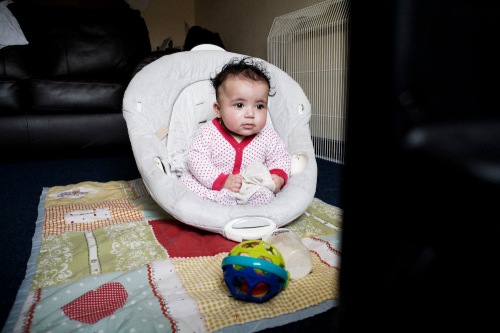 I had texted to see if I could take them both to see Frances’ mum at her house in Moss Side but apparently she has a day of hospital appointments. Instead I have offered to give Frances a lift to one of her friends who lives round the corner from her mum’s.

I’ve brought my laptop to show her the final edit of the cinema advert she filmed for Reclaim a few weeks ago. I’ve seen it several times already and so instead of it bringing a tear to my eye it now only brings a lump to my throat.

As I photograph Frances watching the two minute film, Mia is uncharacteristically grouchy from in front of the TV, unable to see her mother. “Mia!” calls Frances reassuringly. “Ah it’s wicked,” she says as the credits roll, “and look, Mia has her name on it too. I love that.”

I pick Mia up and sit with her on my knee as I ask Frances how things are going. Mia looks up at me, beyond me, transfixed by the reading glasses I have pushed on the top of my head.
It’s impossible not to fall into baby talk. “Why has he got those glasses on? Hey? Hey? Is he bonkers? Yes he is. Yes he is. You are a gorgeous baby, aren’t you? Aren’t you?”

I ask about Frances’ mum (she’s getting better); about the Family Nurse Partnership nurse, Jane (she’s happy with progress); about housing (no change really) and about college.

“The travelling is just annoying. I have to get two buses from here or, if we stay at Hassan’s mum’s then I have to get three buses,” says Frances, “but I have had a cheque from the Prince’s Trust for my materials.”

“What do you think? Will you stick it?”

“And so, Frances, what’s exciting you at the moment? What’s worrying you? What’s on your mind?”

“I really want to get a job. One of my really good friends applied for a job in a call centre, a job I told her to go for, and she’s got it! She’s on £400 a week! Because she’s living with her mum she doesn’t have to pay rent even, she doesn’t have nappies to buy. If I had £400 a week…. I’d be… jumping off houses.

“Yes, yes,” I say to Mia, who is getting bored with me. “Are we going to Moss Side now to see some friends? Are we? Are we?”

Frances starts the long process of getting ready to leave the house with a baby. She sings along to the TV as she prepares four bottles of formula milk: “… smart potatoes sing with me…” and then, as I have the laptop, I suggest she has a look at our blog.

“Have you seen the blog recently?” I ask. Although she approves the text for each blog post on Facebook through her mobile phone, Frances doesn’t have a computer and so infrequently sees the finished entry. She loves the picture of her daughter in the chippy.

“Look at those eyes,” she says, “and see how she has grown. She wouldn’t fit in that Moses basket now.” 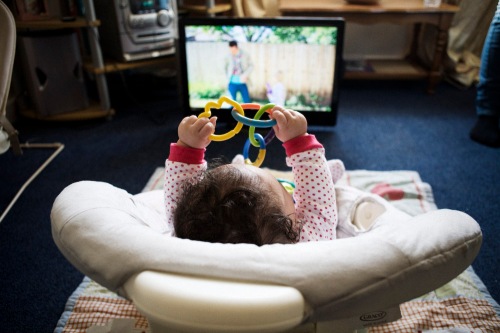 Comments Off on The gorgeous baby